Building an E-Ink Calendar, and a UI Toolkit along the way

Having worked from home for the better part of the year, I recently started to work on a new project. Building a E-Ink based dashboard which would keep track of my meetings among other things. Given the always-on nature of the E-Ink display, this would help me better manage by schedule during a typical work-day especially given I tend to miss Google Calendar notifications a lot. 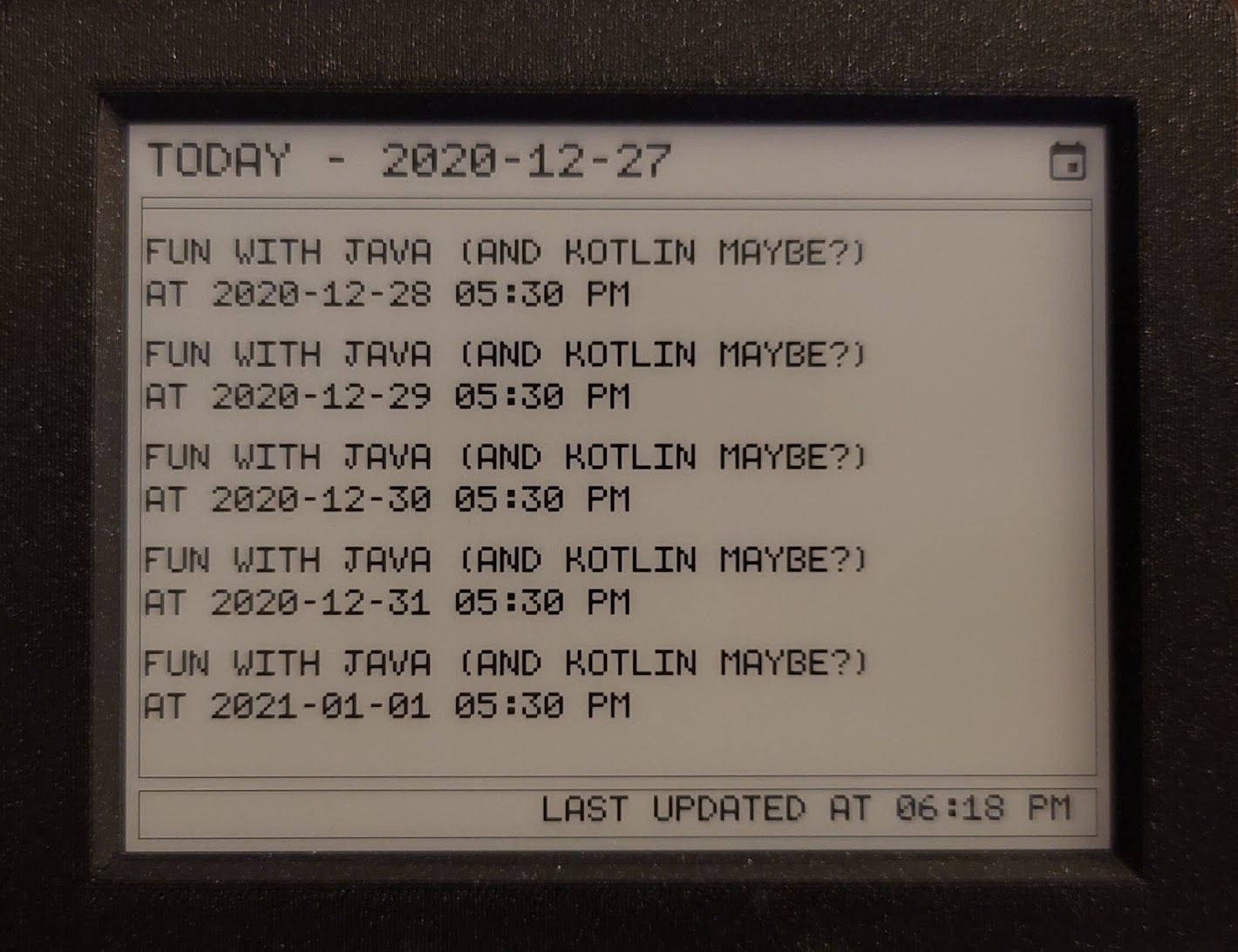 The app here is showing the next 5 Calendar events for a demo Google account.
Looks nice and simple, does it not ?

I took an off-the-shelf approach for the hardware. I purchased an InkPlate 6 which was originally crowd-funded on CrowdSupply.

The E-Ink display is from a recycled Kindle e-reader, which means its a pretty great display. It has 2 modes including a 2-bit per pixel gray-scale mode and monochrome. It supports partial updates in monochrome mode. The display is connected to a ESP 32, with built-in WiFi. All we need to do is to hookup the display to a PC via a USB cable and power it on. The display also comes with a nice 3D printed enclosure.

The InkPlate 6 supports MicroPython, and recently the libraries powering the display were opensourced. This gave me a decent foundation to build on top-of.

The first step to showing events from Google Calendar is to be able to complete an OAuth2 flow. I decided to use the device flow given the limited input capabilities of the ESP 32.

MicroPython does not have any libraries that work with OAuth2, so I decided to write one. Here is the PR that I eventually made to the micropython-lib GitHub repo which adds support for this specification. This ended up being pretty straightforward, given my familiarity with OAuth2 (having authored this library before).

The InkPlate has a decent Graphics API, but rather than having to hard-code coordinates to render UI i decided to take minor detour and build a mini UI Toolkit from first principles based on the graphics primitives that were supported. I took a lot of inspiration from the existing Android UI View system and build a small subset of those APIs.

The first step was to be able to measure the text to be able to compute how much space text with a given text size would occupy on the screen. The InkPlate uses bitmap fonts, so i ended up using a look-up-table for widths and heights for individual letters for a given size. It's an approximation, but it worked well enough for me to proceed to the next step. 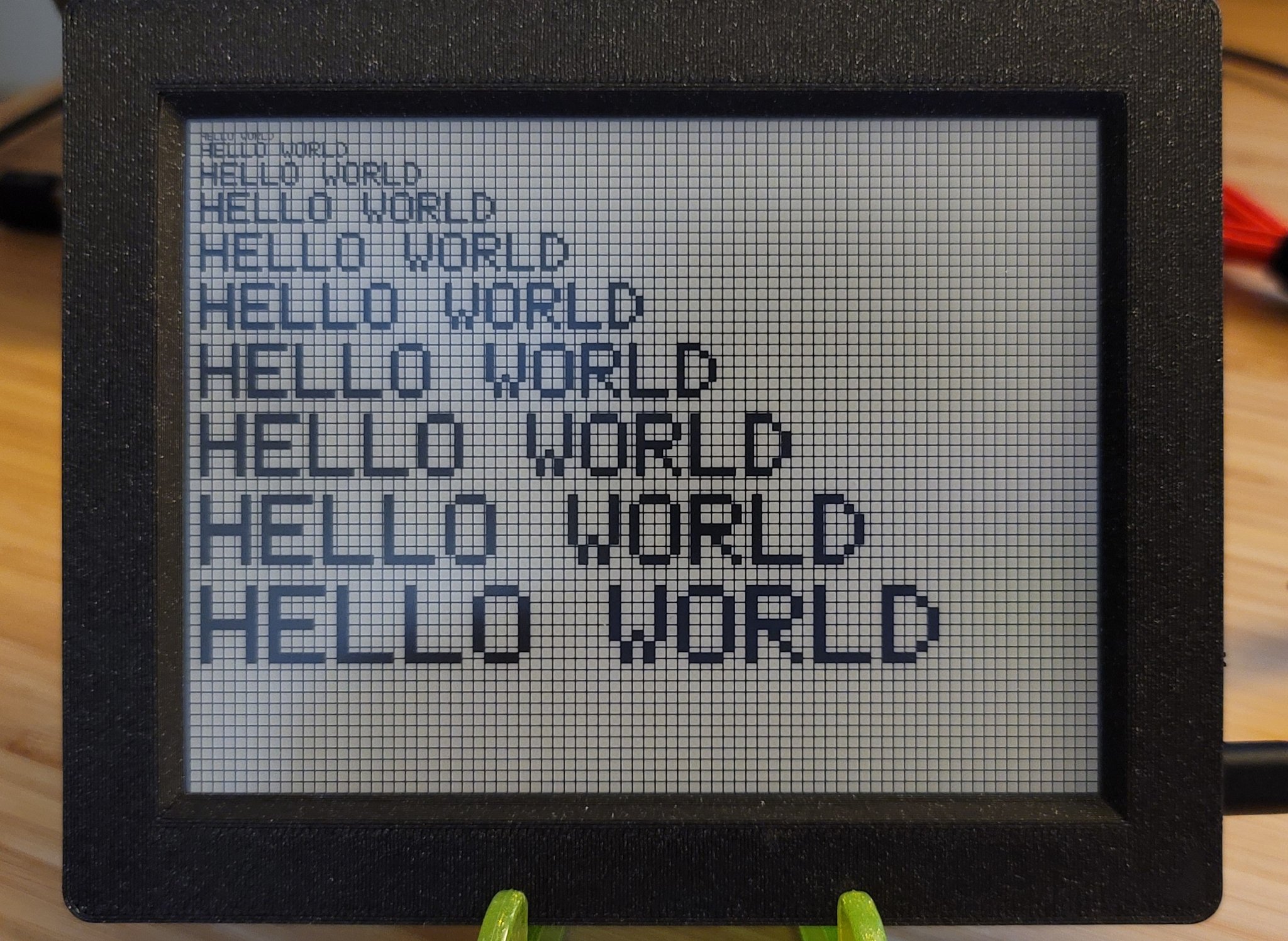 Now that I had text measurements I could start drawing some text in Columns and Rows (these are the containers supported by the custom layout system). I managed to also implement padding and text alignments. Not perfect, but still pretty good progress.

The image below consists of a single Column with a nested Row and a bunch of Text nodes in various alignments and sizes. The 10px box on top is a component called Spacer which just occupies empty space on the screen. 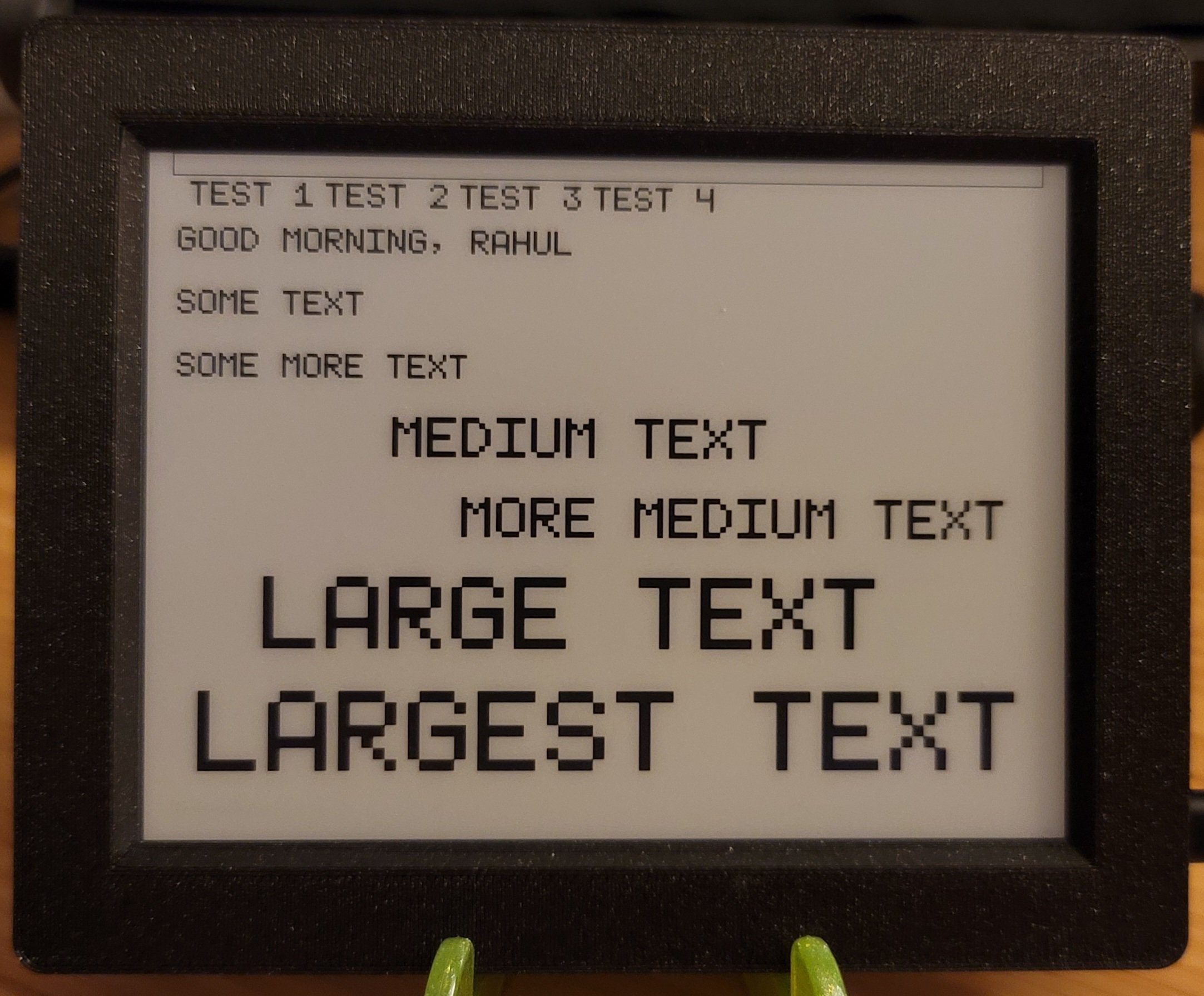 Now that I had some basic building blocks, I decided to go further and implement more complex layouts. I implemented support for aligning containers and fixed a lot of bugs when nesting containers. You can also see text alignments within individual Column containers working. 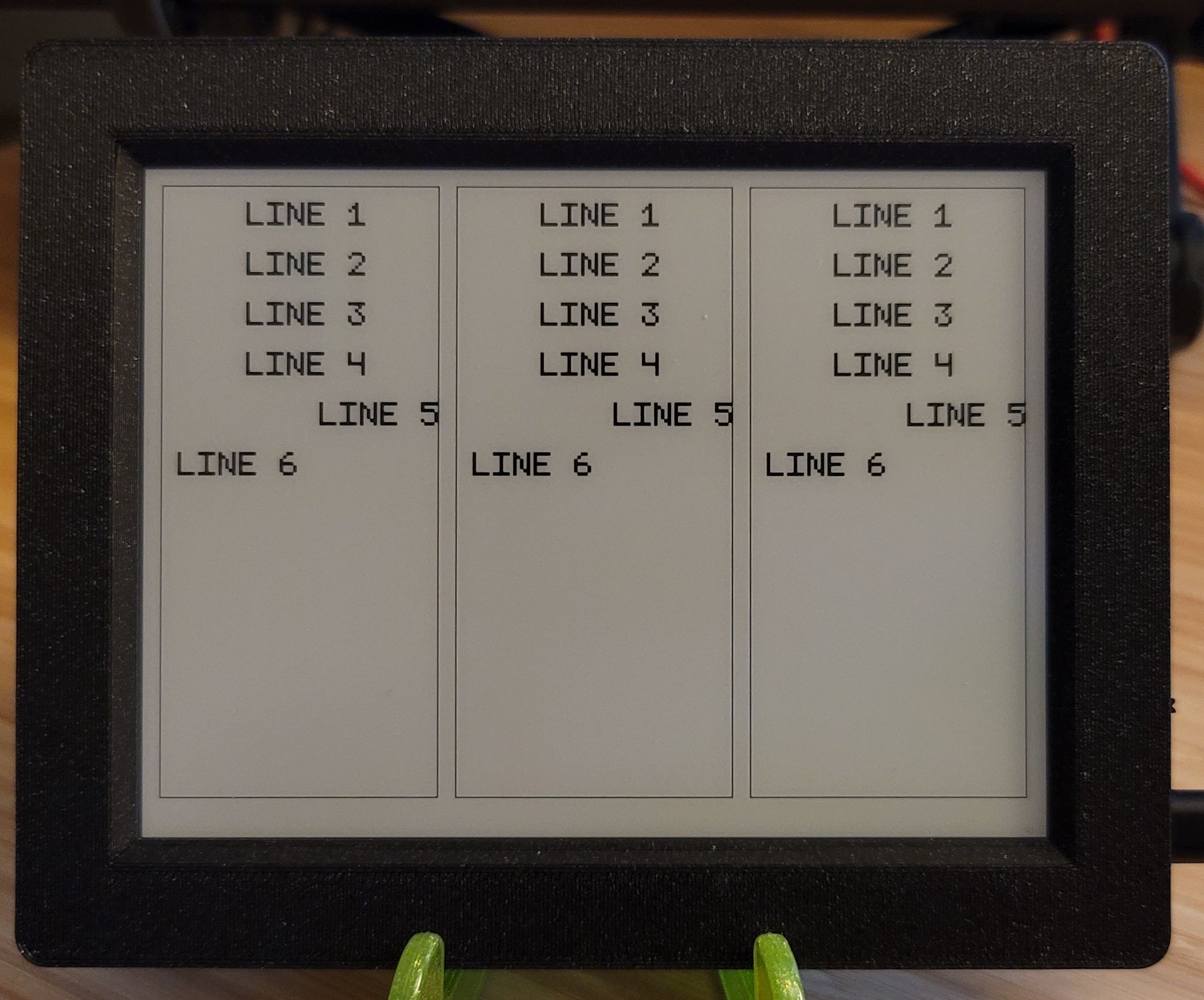 I finally added support for Image nodes to layouts. This is also when I started to add some much needed UI polish. 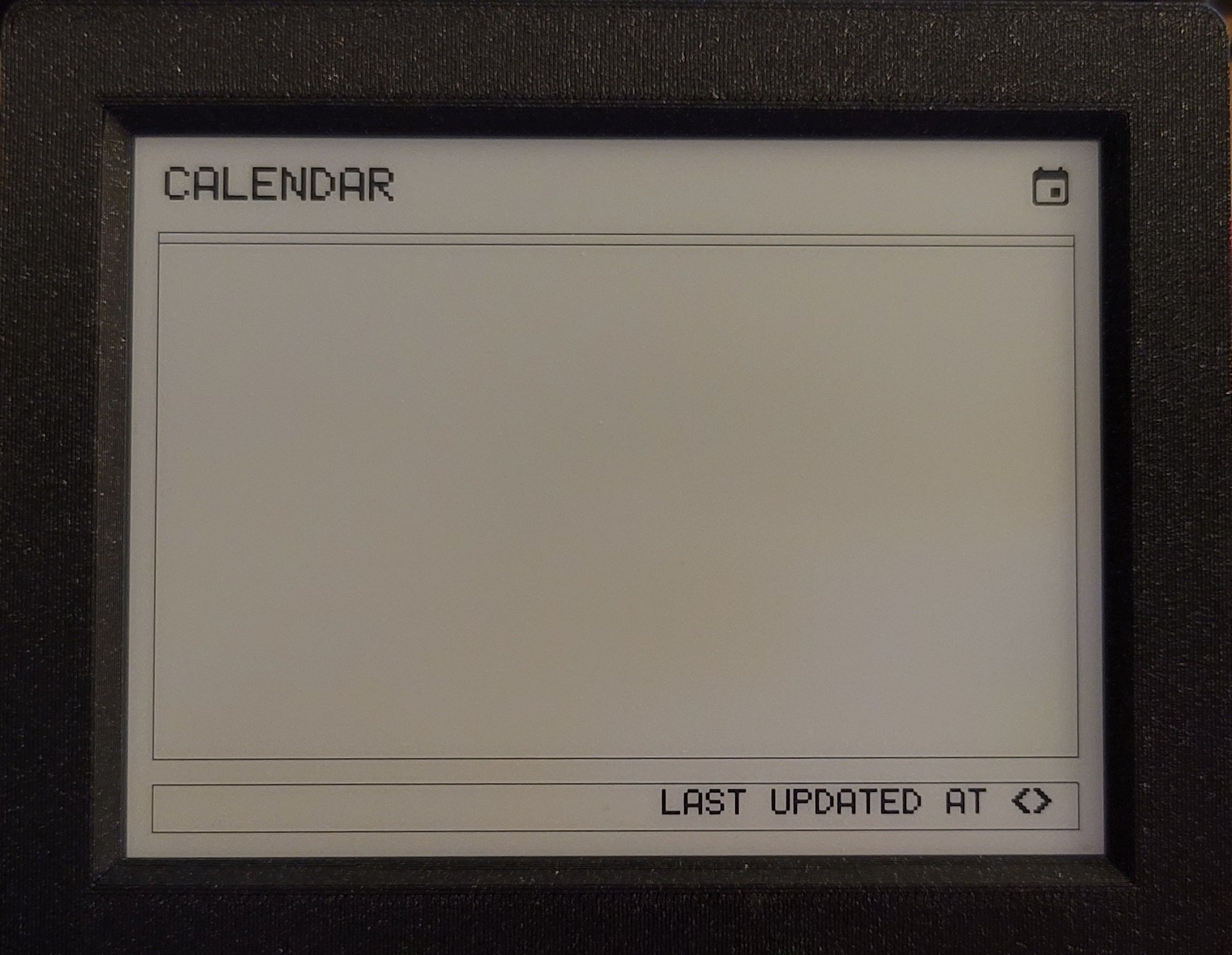 I also worked on other additional features along the way, including:

This project was a lot of fun. I learnt a lot, especially given that I did not intend to build a UI Toolkit when I started working on the project). The toolkit i built is janky, but it is an accomplishment, considering I have never built one before.

MicroPython was incredible to prototype with (despite lacking a graphical debugger). I would highly recommending picking up a board that supports MicroPython for your next hardware project. The MicroPython community (libraries + forums) is also pretty active and helpful

All the source code that I wrote for the project is on GitHub. The entry point is a file called app.py. Bear in mind, that all of this code was written in ~ a week long period. I also plan on making some more minor improvements to the UI.